Many thanks to our outgoing Board of Directors member Pat Franc, CEO of Tri-Arrows Aluminum. We appreciate his many contributions.

Dr. Rong Chen joined Secat as a Materials Engineer in Jan 2015. He received his Bachelor’s and Master’s degree at the Department of Engineering Physics in Tsinghua University, Beijing, China. He came to the United States for further education and got his PhD in Materials Science and Engineering at the University of Kentucky in 2009. During his graduate study he focused on mechanical characterizations and processes of solder alloys, bulk metallic glass, and Ti based alloys. Before joining Secat he worked as a research associate at the UK Center for Applied Energy Research where he’s been working on developing and characterizing energy/power dense materials for electrochemical energy storage applications. Dr. Chen authored/co-authored over 20 publications on journals and proceedings and gave more than 10 presentations at international conferences. We are very happy that Dr. Chen has joined our team.

Aluminum extrusions are widely used in the transportation, construction, and aerospace industries. To meet the increasing demand for surface quality, strength and corrosion resistance, the extrudability of the billets used for producing the extrusions has to be ensured. Therefore, it is essential that the billet has been homogenized correctly to meet the quality requirements of the extruded profiles. Generally, the aluminum billets would be heated up to a solutionizing temperature, held for a specific time and then quenched at a designed cooling rate to control the particles/precipitates within the solid solution. Since the billet homogenization quality is directly related to the property of the extrusions, operators must be confident of the billet homogenization process prior to scheduling the extrusion production plan. Secat provides complete aluminum billet homogenization evaluation using its state of the art laboratory equipment. The evaluation may include (i) grain size at different locations, (ii) macro & microstructure inspection, (iii) inverse segregation zone measurement including Bergmann zone, (iv) inclusion and porosity inspection, (v) quantity analysis of particles (e.g. Mg 2 Si and AlFeSi), (vi) phase identification and transformation confirmation, (vii) hydrogen content, (viii) c
hemistry, etc.

An example of billet evaluation is shown. Fig 1 shows three 6000 series billet slices that were received for evaluation. The three slices came from 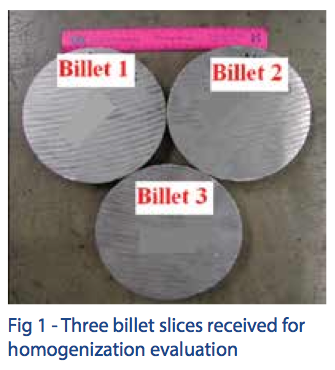 different locations within the same billet and
from a specified location in the homogenization furnace. Fig 2 shows the grain size evaluation using the Buhler-Omnimet Imaging System. The grains had an average grain size of ~93 μm with
equiaxed grain morphology. 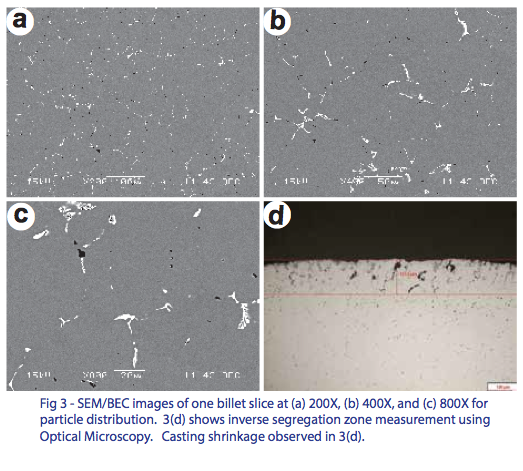 Fig 3 shows the SEM images of particle structure in the back-electron contrast mode (BEC) at 200X, 400X, and 800X for particle analysis. It
can be seen that the Mg 2 Si particles (black) and AlFeSi particles (white broken needles) were mainly distributed along grain boundaries. The broke
n needle shaped AlFeSi particles and the AlFeSi % transformation from Beta to Alpha along with the residual Mg 2 Si density and grain size were used to verify if the homogenization schedule was correct. Casting parameters like inverse segregation zone and shrinkage were also evaluated in Fig 3. Inclusion size and percentage were also determined; in this sample no inclusion larger than 20 μm was observed. The data can be compared with customer specifications in order to determine if customer requirements are met. 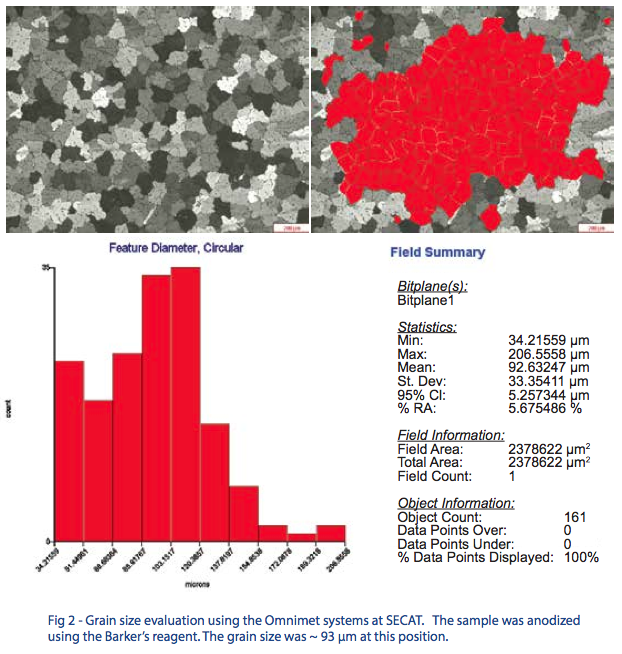 The beverage can and automotive sectors have become major markets for the aluminum industry. The beverage can market is based on aluminum sheet and appears to becoming a mature, stable, and possibly shrinking market. Automotive requirements include virtually all of the aluminum product forms as may be required for numerous automotive components. The need for reduced automotive weights for improving fuel efficiency has been the major impetus leading to the rapid growth in automotive use of aluminum. Of all of the automotive applications, exterior panels of aluminum have been limited to hoods, and side and door panels for high-end cars. This is now changing with the introduction of the 2015 Ford F-150 truck with a body that is 97% aluminum. The Ford F-150 has been the highest selling automobile in the US for the past 32 years.

Since their commercial introduction in 1959, two-piece aluminum beverage cans have become a major worldwide market for aluminum sheet products. After commercial introduction, there was rapid growth in the use of aluminum beverage cans at the expense of steel cans. By 1970, aluminum cans had overtaken 20% of the steel can market for soft drinks and beer; by 1977, 50%; and by 1994, 96%. By 2007, 115 billion cans were produced in North America. Similar trends in the volume of aluminum beverage cans at the expense of steel have been seen throughout the world. At the present time, 280 billion beverage cans are produced worldwide, of which 85% (238 billion) are aluminum. The beverage can market has become a highly competitive market for aluminum producers, and one that is nearing saturation. Future growth will depend on the growth in soft drink and beer consumption, and the development of new packaging applications using aluminum sheet. In contrast, pressure from the beverage and can-making industries to develop technologies for reducing the thickness (weight, cost) of the sheet materials used for cans will continue as it has throughout the history of the market. The first generation aluminum cans weighed approximately 3 ounces per unit. As a result of technological developments in can design and sheet production processes, today’s cans weigh less than half an ounce. In essence, the aluminum sheet producer is being told to work harder to make less in a highly competitive market.

From the inception, it had been recognized that recycling would be a requirement to ensure the long-term viability of aluminum beverage can applications. Along with avoiding additional landfill waste, aluminum can recycling permits significant energy savings and reduced environmental impacts. Recycling aluminum requires 95% less energy than producing cans with primary aluminum. Aluminum containers can be recycled and turned into new aluminum cans indefinitely with no loss in product quality. With an average turnaround rate of 60 days (a can on the grocery shelf to a new can on the grocery shelf), the metal in a single container could easily be recycled six times a year, year after year. The aluminum industry, can fabricators, beverage industry, and government entities have actively endorsed can recycle programs. In recent years the US recycling rates have been in the range of 65% to 67%, however rates of greater than 90% have been achieved in a few states with can deposit legislation. The global average is 76%. Brazil has consistently been the most successful can recycler with rates of 98.2%, and recycling rates exceed 90% in Austria, Belgium, Brazil, Germany, Japan, Sweden, and Switzerland. Figure 1 shows the major production steps for a closed-cycle aluminum can production/recycle scheme.

The quantity of aluminum products supplied to the automotive market has experienced significant recent growth. According to Mike Murphy, Alcoa’s VP for Global Automotive, it has ranged from less than 100 pounds/car in 1975 to 343 pounds/car in 2012, and is projected to grow to 550 pounds/car in 2025.

Figure 2 shows a breakdown of the aluminum used for various automotive components. The various applications shown require the use of various aluminum product forms and alloys. A 2015 four-door Ford F-150 has 600 pounds of aluminum, or nearly twice the average use of aluminum per vehicle now, according to Drive Aluminum, an aluminum industry Web site. If the Ford truck is a success, use of aluminum could expand rapidly at the expense of steel. Ford F-150 sales in 2014 in the US were 753 thousand vehicles; in 2013 US sales were 763 thousand; Canadian sales were 122,000; yielding total North American sales of 886 thousand. Over the period of time since 1997, the highest level of North American sales has been 1,010 thousand in 2004, and the lowest has been 495 thousand in the recession year of 2009. 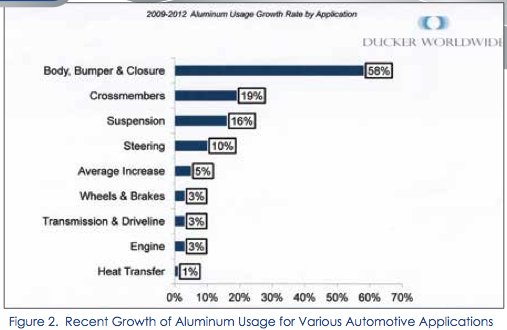 It is ironic that one of the most significant steps towards down-weighting ever taken by an automotive company is occurring simultaneously with the development of significant new energy resources through the rapid growth of fracking. This begs the question of whether the automotive consumer will place the same importance on improved efficiency when gasoline is selling at or below $2.00/gallon, than when it was selling at or above $3.00/gallon.

Questions to be Answered in the Future

Will the 2015 Ford F-150 performance and customer acceptance be positive or not, and what effect will that have on additional adoptions of aluminum body in white applications?

What effect will the new dynamics of energy availability and pricing have on consumer desires for improved automotive efficiency?

To what extent will there be changes in government regulations affecting both automotive efficiency and beverage container use and recycling?

How can the growth in aluminum sheet demand for automobiles and cans be kept in coordination with primary and rolling mill production capacities to avoid significant increases in aluminum prices? Such price increases would have adverse impacts on all aluminum product applications.

What effect will competitive materials have on future aluminum sheet markets? Likely competitors for cans are plastic (PET) and glass. Competitors for automotive applications include steel, plastics, magnesium and, especially, carbon fiber composites.

Aluminum railing structures are normally fabricated with a combination of extruded tubes, rods and other profiles with aluminum plate/sheet where applicable. The welding is normally done before painting/anodizing to ensure that the welds are completely and uniformly covered by the coating. The photos below show a representative aluminum railing used in flat construction.

A customer noticed issues with localized corrosion at weld notes in aluminum railing assemblies after a few months in service, and requested Secat’s assistance in identifying the nature and probable cause of the corrosion.

Samples were sent to Secat for evaluation. A detailed surface and cross sectional microstructure characterization of the area around the corrosion sites was performed. The analysis revealed inter-connected micro cracks within the welds that permitted moisture to be wicked into the structure. This resulted in chlorides and sulfates within the water reacting with the aluminum substrate causing localized corrosion around the welds, leading to blistering and peel off of the coating.

Based on Secat’s work, the customer was able to determine the probable cause of corrosion and take corrective action in their welding procedure in order to form welds with no internal defects.

Mr. Deaton is involved in numerous civic and community organizations throughout Kentucky. He is a graduate of Louisiana State University, Graduate School of Banking of the South and also graduated from the National Commercial Lending School at the University of Oklahoma.

What brought you to the Board of Directors of Secat?
Fred Mudge, former President and Chief Executive Officer of Logan Aluminum in Russellville, KY asked me to get involved and thought I could be helpful to the organization.

In your opinion, what makes Secat unique/special in the industry?
I believe the partnership between the aluminum industry and the UK College of Engineering to promote research is unique. It has established a spirit of cooperation that is a leading example of what can be accomplished through organizations that develop a common understanding of the future needs of the industry.

What is the most important/exciting development you see in the future for Secat?
I’m very excited about increasing use of aluminum in auto and truck manufacturing to reduce weight and improve fuel economy. That can have far-reaching implications for the future.

Tell us something about yourself that people may not know and anything else you would like to share.
Unlike many of my fellow bankers, I hate to play golf! It moves much too slowly for me. I’ve never invested any time at it and my game shows it.