The TMS 2015 Annual Meeting & Exhibition (TMS2015) held the week of March 16th, 2015 was attended by around 4,000 scientists and engineers including a large number of students, at Walt Disney World, Orlando, Florida. The technical presentations were made at 70 symposia and the technical programming took place over the course of four days.

Workshops were held on Aluminum Melting, Anode Carbon and Reduction that helped attendees to understand the latest developments in technology, best practices and improvements in process.

Primary aluminum production was covered under Reduction Technology and Electrode Technology with Cast Shop Technology covering the melting and casting of aluminum ingots and slab.

The area of metal quality was well represented in cast shop technology and this is discussed in greater detail.

ABB presented the capabilities of the new LiMCA III that they have introduced to the market. Constellium presented a paper discussing the use of the LiMCA to measure the inclusion at different depths within a furnace.

The other interesting area was the use of ultrasonics for degassing and reduction of inclusions in liquid Aluminum. This has been developed by Southwire Company, LLC and is a follow up to a paper presented at TMS 2013.

The inclusion removal when coupled with CF F s resulted in virtually total inclusion removal with removal of medium to large oxide films. Most importantly the process did not introduce any new inclusions/contaminants via chlorine and chloride creation.

[1], lower than most other common structural metals like iron and steel, its behavior 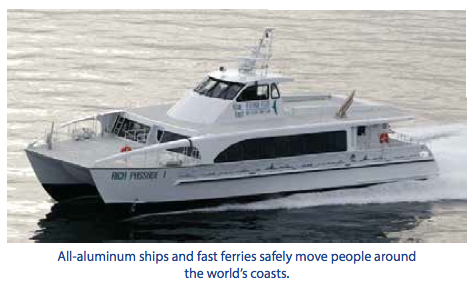 in some structural situations sometimes leads to misconceptions about its fire resistance which in turn may result in serious errors in the media and literature. For example, during Great Britain’s brief war with Argentina, it was widely reported that the HMS Sheffield was destroyed by Argentine rockets because the ship was made largely of aluminum; in fact, the Sheffield was made entirely of steel, and its destruc- tion had nothing to do with aluminum [2].

In some other situations, vehicles such as cars or trucks with aluminum components are reported to have burned because the aluminum components seemingly disappear; in fact, in those cases the temperature of the fire was high enough to melt the aluminum, which in molten form seemingly disappears as it runs off or vaporizes in relatively small droplets.

The non-combustibility of aluminum and its alloys has been well documented through extensive testing using ASTM Standard Methods [3] and British Standards [4]. In such tests aluminum components are subjected to representative fire exposures at temperatures around 1800°F /1000°C, and in no case has either combustion or the release of noxious fumes been observed under normal atmospheric conditions.

Aluminum and its alloys gain the top rating of “non-combustible” or “A” dependent upon the test specifications. In parallel tests to measure flame spread resistance, no case has ever been observed in which aluminum or one of its alloys contributed to the ignition or spread of flames [5].Furthermore, aluminum is not subject to any thermic sparking which can cause fires, with the single exception of being struck by or striking rusty steel, and if this is a possibility, sparking may be avoided easily by painting the aluminum [6].

Aluminum alloy, like iron, steels, titanium alloys, and most other metals, can be made to burn in a pure oxygen environment [7]. Fortunately this situation does not occur under normal atmospheric conditions.

Procedures also exist to handle the situation in which aluminum alloy components or structures have been exposed to a fire but not melted, and there is a need to estimate its residual strength to see if the component or structure can safely be left in service. Aluminum alloys do lose some strength when exposed to temperatures above 212°F/100°C for significant periods [8], but they do not typically deform until temperatures near 800-900°F/500-600°C. In order to estimate whether or not and, if so, the degree to which those alloys and structures have been compromised, the results of nondestructive tests like hardness and electrical conductivity may be used to estimate with reasonable accuracy the retained mechanical strength [9].

The physical properties of aluminum alloys also help in this respect, as their specific heat, thermal conductivity, reflectance, and emissivity all combine to require more energy input to raise the temperature of alumi- num when subject to external heat exposure than for steel [10]. The net effect is that aluminum alloys are slower than steels to increase in temperature in a fire, quite possibly allowing more time for individuals in those structures to get out before the fire reached catastrophic condi- tions. Once the temperature exceeds the melting point, of course, the aluminum components will melt and run off.

For many years, the performance of aluminum alloys has been excellent in many applications requiring good performance at relatively high temperatures, including

But, of course, there are applications where the use of aluminum would be unwise, notably any application like smelting or melting furnaces where temperatures are routinely significantly above 600°F/350°C.

For more detailed information on any aspect of this subject, you are referred to Reference 12.

2. The Falklands Campaign: The Lessons, Presented to Parliament by the Secretary of Defense by Command of Her Majesty, December 1982

a. E108 Standard Methods of Fire Tests of Roof Coverings

e. Part 23 – Methods for determination of the contribution of components to the fire resistance of a structure

9. “Fire Resistance of Aluminum,” Chapter 9 of Aluminum and the Sea, Alcan Aluminium Company, 2013 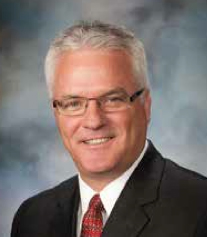 Management from McGill University in Montreal. Buddy began his career in the Aluminium industry in 1979 with Kaiser Aluminium and moved to Alcan Aluminium/Novelis in 1983 where he held various positions in Operations, Human Relations, Sales & Marketing up to Vice President & General Manager of Novelis Speciality Product through 2009. Buddy joined the Oman Aluminium Rolling Company (OARC) in 2010 as Chief Executive Officer and has overseen the establishment of the facility, organization and marketing plans for the company. OARC is a 140,000 ton per year light gauge rolling facility located in Sohar Oman. The world class facility provides light gauge aluminium sheet to the food, heat exchanger and construction industries. In March of 2014, Buddy was appointed Chief Executive Officer of Constellium Ravenswood LCC in Ravenswood WV. Buddy returned to his home town to lead the Constellium Rolled Products Ravenswood which is an industry leader in aerospace plate, General Engineering plate and specialty rolled products.

Buddy is also a Director of Pathfinder Band Holding Company (NASDAQ: PBHC), an Upstate New York Community Bank Holding Company of Pathfinder Bank based in Oswego, NY with assets of $550 million. He has also served as the Chairman of the Automotive and Light Truck Group for the US Aluminum Association focusing on vehicle lightweighting with aluminium products.

What brought you to the Board of Directors of Secat?
When I was approached for the Secat Board, I was attracted by the wide variety of services Secat supplies to the industry and the excellent reputation of the organization. Honestly, my direct experience with Secat was limited, but I was very familiar with the quality of work and analysis done here.

In your opinion, what makes Secat unique/special in the industry?
One of the things is that Secat not only provides excellent technical analysis of our customer needs but it is truly an independent view. This independence allows companies to have a very clear solution or analysis of the issue which can then be adapted within their organization.

What is the most important/exciting development you see in the future for Secat?
I think the vast opportunities for aluminum in the automotive industry provide an excellent format for Secat. While aluminum has been used in car and trucks for many years, the mass production and aluminum intensive vehicles bring new challenges where Secat can help both producers and OEMs.

Anodization is an electrolytic passivation process used to increase the thickness of the natural oxide layer on the surface of metal parts. Anodizing increases corrosion and wear resistance, and provides better adhesion for paint primers and glues than does bare metal.

The process of anodization involves multiple steps including surface cleaning, etching, and anodizing, sealing, and final cleaning of the part.

Secat has been working with several customers to understand their processes in order to identify the root cause of different defects that have been identified after anodizing. These evaluations are performed in two parts: (1) reviewing the process parameters at each stage of the process and collecting samples from each stage during the production of a specific part (2) microstructure evaluation including grain and particle structure as well as chemistry.

Detailed surface evaluation of the parts help identify surface defects like pits, residual process chemicals, etc. that interfere with the process, resulting in non-uniform thickness and irregular grain structure of the anodized layer. Modification of the process parameters to control excess etching of the surface and improved removal of the treatment chemicals result in reducing rejections after the process.